D-Day: On June 6, 1944, Allied forces stormed the beaches of Normandy to root out the Nazis

In the midst of World War II on June 6, 1944, Allied forces stormed the beaches of Normandy in Nazi-occupied France. More than 156,000 troops, notably from the United States, Britain and Canada, confronted Nazi forces on D-Day forever reshaping the war, according to the Department of Defense.

D-Day began the assault phase (codenamed Operation Neptune) of the wider Allied invasion of northwest Europe led by Gen. Dwight D. Eisenhower, known as Operation Overlord. According to Britannica, by the end of August 1944, all of northern France was liberated from Nazi control.

The exact number of people killed in the fighting is unknown, but research by the U.S. National D-Day Memorial Foundation estimates that there were over 4,000 Allied deaths and between 4,000 and 9,000 German losses on D-Day. 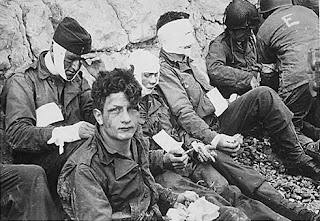 More than 100,000 Allied and German soldiers died during the full Battle at Normandy and around 20,000 French civilians were reportedly killed in the bombings.