The Crime Report: Why Can’t We Rein in Police Misconduct? Blame Prohibition 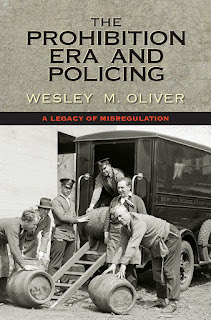 The Crime Report
August 31, 2018
Prohibition in America lasted 13 years—until 1933, when President Franklin D. Roosevelt signed a “beer bill” as one of his first acts in office. The Twenty-First Amendment—­the only constitutional amendment ever to reverse an earlier amendment—went into effect by the end of that year.
But the collateral damage of Prohibition still reverberates through the criminal justice system.
Much has been made of the gangland violence that punctuated Prohibition. Mobsters like Al Capone, who made millions during Prohibition, would stop at nothing to corner the bootlegging market.
However, that was only one facet of the violence.
At times, the police were worse than the mob, and the subsequent efforts to curb Prohibition-era police misconduct have also left a lasting impact on the search for accuracy in prosecutions and limits on excessive force by police officers.
That’s the conclusion drawn by Wesley M. Oliver, a professor at Duquesne University School of Law, in his new book, The Prohibition Era and Policing.
His conclusion is especially worth noting as the nation grapples with multiple cases of police misconduct and the failures to hold law enforcement accountable
Oliver quoted the 1931 The Wickersham Report, formally titled “Report on the Enforcement of the Prohibition Laws in the United States,” which blasted law enforcement during the Prohibition era,
Among its key conclusions:
Pressure for lawless enforcement, encouragement of bad methods and agencies of obtaining evidence, and crude methods of investigation and seizures … started a current of adverse opinion.
Prohibition created “enormous” opportunities for police corruption, Oliver wrote.
While the potential benefit to crooked cops was obvious, over-zealous “honest” officers often took advantage of the zealous enforcement climate created by Prohibition to violate individuals’ privacy, destroy property, or engage in physical violence—all in the name of stamping out alcohol use.
As Oliver points out, police behavior during this era shifted the focus from procedures to ensure accurate criminal trials to preventing police misconduct. The result was the exclusionary rule.
Thirteen days after the Volstead Act made it a federal crime to manufacture or sell alcohol, the U.S. Supreme Court decided Silverthorne Lumbar Co. v. United States. The Court found that the Fourth Amendment prohibits the government from introducing evidence gathered as the result of an unlawful seizure.
The exclusionary rule was not restricted to illegal searches. At the time, police were practitioners of the “third degree”—violence-induced confessions. The term is better known as torture.
Oliver examines the rigidity of a rule that excludes reliable evidence of criminal conduct because of the manner in which it was obtained or, as Justice Cardoza famously said, the result of the watchman’s “blunder.”
By 1939, not only was illegally obtained evidence being excluded but also any evidence discovered as a result of the illegally obtained evidence. The fruit of the poisonous tree, as it became known, was excluded regardless of its reliability.
About the same time, technology began to get in the way of the U.S. Constitution.
As telephones became more and more useful in criminal enterprises, the High Court was forced to consider the privacy rights of individuals. Oliver meticulously maps out a history of the wiretap, highlighting that the Court’s first foray into wiretapping was a failure—a precursor to the modern Court’s struggle with rapidly evolving technology.
In Olmstead v United States, Chief Justice William Howard Taft concluded that the Fourth Amendment only protected tangible things—persons, papers, and effects. Since the police eavesdropped on telephone calls while clinging to a telephone pole outside the house, and not in the house, there was no intrusion and no violation of the Fourth Amendment.
According to Oliver, wiretapping during Prohibition “created such a backlash that communication over wires became more protected than information in sealed envelopes or effects in one’s home.”
So how does Prohibition affect us today? Oliver examines, with clarity and finesse, the Warren Court’s landmark decisions in Mapp v Ohio (exclusionary rule); Terry v Ohio (stop and frisk); and Miranda v Arizona (right to counsel and to be free of interrogation).
Ignoring police misconduct in favor of more reliable evidence of criminal conduct is not an even exchange.
Oliver wrote that “the Supreme Court’s cases are moving toward eliminating the exclusionary rule.”
Certainly Oliver’s examination of the case law would support that conclusion, but ignoring police misconduct in favor of more reliable evidence of criminal conduct is not an even exchange.
As Oliver writes, the late Justice Antonin Scalia suggested in Hudson v Michigan that the exclusionary rule is obsolete because of an “increasing professionalism of police forces, including a new emphasis on police discipline.”
That increase in professionalism is because of the exclusionary rule— not a reason to abolish it.
Oliver’s work is thought-provoking. Accuracy should be the goal of any system of justice, but protecting the public from unlawful police practices—including excessive force—is also a laudable goal.
Matthew T. Mangino, a regular contributor to The Crime Report, served as an elected District Attorney in Pennsylvania and on the state’s Board of Probation and Parole. He is now of counsel with Luxenberg, Garbett, Kelly & George P.C. His book The Executioner’s Toll, 2010 was released by McFarland Publishing. You can reach him at www.mattmangino.com and follow him on Twitter @MatthewTMangino.
To visit The Crime Report CLICK HERE

Posted by Law and Justice Policy at Saturday, September 01, 2018

The book is well written and easy to grasp even for those not legally trained. Professor Oliver’s suggested reforms are intriguing and worth attention.