The five leading manufacturers of assault rifles in the United States have brought in a combined total of at least $1.7 billion in revenue from AR-15-style weapons over the past decade as gun violence across the country has surged, according to an investigative report the panel presented at a recent the hearing, reported The New York Times. 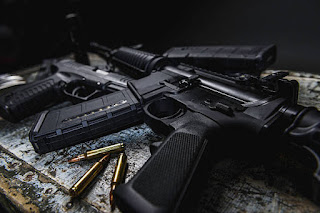 “I cannot even imagine what those innocent children had to go through,” Mr. Daniel said. But he avoided answering whether he felt any personal responsibility, saying, “These murders are local problems that have to be solved locally.”

The findings underscored how the gun industry has thrived by making and selling weapons of war, specifically targeting and playing to the insecurities of young men, while some have made thinly veiled references to white supremacist groups.

The committee opened its investigation of the gun manufacturing industry in May after the Uvalde massacre, which killed 19 elementary school students and two teachers, and a racist mass shooting in a Buffalo supermarket that killed 10 people.

The panel requested that the country’s top five gun manufacturers share information on their sales and marketing strategies, as well as any efforts they make to track safety data related to their products.

“The business practices of these gun manufacturers are deeply disturbing, exploitative and reckless,” Representative Carolyn B. Maloney, Democrat of New York and the chairwoman of the committee, said in a statement. “We found that none of these companies bothers to keep track of the death and destruction caused by their products.”

The hearing came weeks after President Biden signed into law the first substantial gun safety bill in decades, the product of a bipartisan compromise that beefed up background checks for gun buyers under the age of 21. Yet more sweeping measures, such as a ban on assault weapons, have gone nowhere amid solid opposition by Republicans.

The House was expected to vote on such a ban in the coming weeks, but the bill has no chance of passage in the evenly divided Senate. The vote had originally been expected on Friday but was delayed as House Democrats haggled among themselves over whether to tie it to a broader public safety bill that would increase funding for the police, according to a person familiar with the plans.