In 1922, Robert Frost wrote one of America’s most revered and recited poems, “Stopping by Woods on a Snowy Evening.”
Today, New Year’s Day, those words enter the public domain, along with a huge cache of other long-copyrighted material. For the first time, we and anyone else can reproduce Frost’s iconic work without permission or restriction, reported Steve Hendrix of the Washington Post. Here it goes 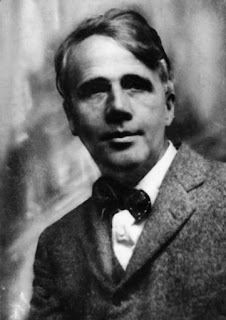 Whose woods these are I think I know.
His house is in the village though;
He will not see me stopping here
To watch his woods fill up with snow.
-
My little horse must think it queer
To stop without a farmhouse near
Between the woods and frozen lake
The darkest evening of the year.
-
He gives his harness bells a shake
To ask if there is some mistake.
The only other sound’s the sweep
Of easy wind and downy flake.
-
The woods are lovely, dark and deep,
But I have promises to keep,
And miles to go before I sleep,
And miles to go before I sleep.

The work’s four stanzas—spare, musical and haunting—have been memorized by generations, dissected by scholars and beloved by presidents. And now that they are beyond the reach of copyright law, anyone can emblazon them anywhere, from inspirational posters to beach towels. Composers can lyricize them. Teachers can photocopy them. FedEx can paint “Miles to go” on its trucks. “Easy wind and downy flake” would make a good line of dryer sheets and laundry soap. Frost’s words belong to the ages and to everyone.
The poem, with its moody pondering of mortality, was born in a flash of inspiration midway through Frost’s life of professional acclaim and personal loss. In the summer of 1922, the poet was struggling with a long poem at his home in Shaftsbury, Vt. He had been working all night in the kitchen, Parini said, frustrated and thwarted. He crumpled up his efforts and went out onto the porch in time to see the first glow of dawn.
Somehow, the sunrise of a dry summer morning evoked in his tired writer’s mind the evening of a snowy winter’s day. Almost a “hallucination,” he would say later. He turned back to his pen and one of the century’s great poems was born “without strain,” in Frost’s words.
By the 1960s, Frost had reached the cool evening of his years but was a cultural hot commodity. The poet was a favorite of fellow New Englander John F. Kennedy, who invited Frost to begin the tradition of a poet reading verse at presidential inaugurations. But even before, Kennedy ended many of his campaign speeches with “And miles to go before I sleep/And miles to go before I sleep.”
To read more CLICK HERE